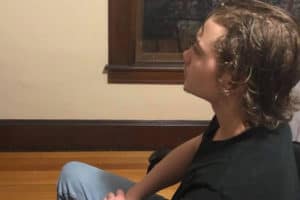 In high school, he began smoking weed and drinking beer. It felt manageable — almost like a rite of passage. He was starting catcher on the baseball team, after all. His mom was a teacher and his dad a roofer. His younger brother idolized him.

Then, wild mood swings became an unwelcome, uncontrollable compass in his life. Some days felt like riding rainbows, others he spent in bed.

He got booted from the baseball team — his social anchor — for missing school and letting his grades slide. Without the sport he believed defined him, he smoked more weed, began selling it, and experimented with other substances.

Soon, he was in the grips of addiction.

Omar disappeared from his home for days. If he thinks about it now, those days are lost. He can barely recount where he was, which makes him sad and bewildered.

“I was self-medicating. I was making money. At the time it all felt like a great solution. Until it wasn’t. The summer, pretty much all of 2018, was a ‘run.’ It was rocky,” Omar said during an interview at Goodwin House.

The program, opened in 2017, is named after CHD president and CEO Jim Goodwin. It’s a 90-day program designed to fill the void of residential treatment programs for teen boys.

“This is the only residential addiction program in Western Massachusetts for boys 13 to 17. We focus on therapy and self-help. We connect them with Alcoholics and Narcotics Anonymous programs. That’s not easy to do when you’re that young,” says program director Chantal Silloway.

Outside of baseball, a “run” is not a good thing. It’s an extended period of drug or alcohol use, of being truly out-of-control.

His family tried everything, including a farm school in Virginia where he was ejected for vaping and deliberately eating a poisonous flower. There were hospitalizations, substance use placements, doctors, prescriptions.

At a breaking point, he chose Goodwin House. “I decided I’d stick it out here. Do something right for once,” he says. “The staff has been incredibly helpful. They’re supportive. It almost makes me afraid to think of where I would be without this program.”

After attending a sober high school in Springfield, Omar returned home to attend a similar school in Eastern Massachusetts and play baseball at his alma mater.

“I never realized how smart I was sober,” he says. “I’ll graduate with my class, which I never saw happening a year ago.”