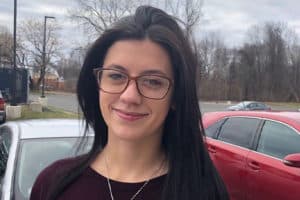 Drinking in high school transformed Victoria into a “social butterfly,” she recalls. Before long, however, life was full of unexpected sorrows.

Carrying a baby to term at 19 while hooked on Percocet … becoming addicted to cocaine … snorting heroin … weighing 98 pounds for her first stint in rehab … being involuntarily institutionalized by her mother … being revived by Narcan at 21.

“I was so sick in my head. The disease took over,” she says.

In the midst of substance use, there were attempts at sobriety, living in a tent in the woods, and stealing jewelry from her family – including her stepfather’s wedding band. At the time, Victoria felt no remorse when she pawned it for $15.

At rock bottom, Victoria secured a room for herself and her son Mason at Grace House. A rarity in Massachusetts, the house accepts mothers who are pregnant or have children up to 18.

Built into its structured schedule is time for moms and their children to do crafts, work on projects, or just be silly. There’s a sunny playroom with bookshelves and walls of toys.

“They taught me how to live a life,” Victoria says. “A life that’s focused on my son, my family, working, and carving out a future.”

Today, Victoria has a full-time job as a recovery counselor at Swift River. Addiction Treatment Center. She works the night shift, ushering people through the first steps of active detox. She talks them through long nights of withdrawal, encourages them through the next day – and the next.

She now has her own car, a re-established license, and pays her own car insurance. These are the brass rings she’s captured in recovery.

“Today, I’m so grateful for everything,” Victoria says, yet there was one more thing she needed to do.

Late last year, she replaced the stolen wedding band, wrapped it up, and gave it to her stepdad. The note inside read: I’m slowly trying to right the wrongs. The gesture was met with a big, silent hug.