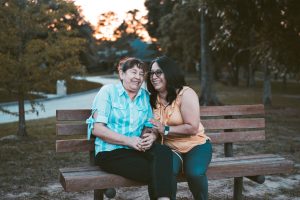 Throughout the month of June members of CHD’s Adult Mental Health team, along with the organization’s property management staff, worked amid a tight deadline to ready two new Group Living Environments (GLEs) in order to have them ready before residents moved in by late June.

These new GLEs provide support to women referred by the Mass. Dept. of Mental Health (DMH) with severe mental health needs, some with co-occurring mental health and substance use issues, who have little to no experience living on their own. Both homes are currently serving primarily women over the age of 50, many of whom also have medical impairments due to lack of access to healthcare in the past; however, the GLEs are not exclusive to this age group and can support women of any age referred by DMH.

Residents of each GLE are referred by meeting the criteria for DMH eligibility, which includes diagnoses of schizophrenia, bipolar disorder, and more, as well as a significant amount of trauma history without the skills to recover from such on their own. In many cases, those served do not currently have the skills to live on their own, and the program offers a safe and serene place to potentially acquire self-sufficiency skills as part of residents’ treatment goals before the next step in their care.

Leading the charge to ready the new GLEs was Director of Residential Services Candace Pennington, whose major focus for the better part of a month was overseeing the acquisition and preparation of these new spaces while also working remotely.

In order to ready the houses in time, Pennington needed to pour a great deal of her time into every aspect of preparing the GLEs. Despite the quick turnaround, Pennington rose to the challenge, which she says was only possible with support from leadership and staff alike, as well as the proficiency of her other residential supervisors on her team.

“I had a lot of support from [VP of Behavioral Health] Katherine Cook and [Program Director] Scott McNally, and others like our Administrative Manager Joanne Marcoux. I was able to focus on this need because my team of Residential Supervisors are so skilled and professional that I didn’t have to worry about anything with the other houses (she oversees) during this project,” Pennington said. “I’m very fortunate to have great leaders as well as great staff in our program who are willing to pitch in and do what they can to help provide the proper balance of staff to our persons served. They’re so dedicated to the people they serve and our purpose, and I truly could not have done this without them.”

In addition to hiring staff for both new homes, which presented some obstacles due to COVID-19, Pennington also worked to ensure the homes were completely furnished and met all licensing standards and requirements.

Pennington said that residents, many of whom have been in the system for upwards of 15 years, have remarked on how nice and comfortable the newly prepared locations are, referring to their respective home as their new “castle.”

“We try to provide them with a nice quiet, stable place to be and work on keeping them as independent as possible until the next step in their care,” Pennington said. “The houses are beautiful, and they have large, private yards that residents can enjoy. It really makes for peaceful and serene living.”