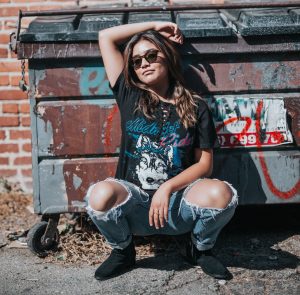 I recently did something I had thought about for years but never had the courage to go through with. I wanted something so badly, yet kept convincing myself not to get it because I wouldn’t use it. If I spotted one in another driveway while driving through town I would feel a twinge of envy—and a hint of shame for not fulfilling my dream. I finally decided this was the year. Another birthday was around the corner, the world was a mess, and so was my life. No dear readers, I did not buy a Harley-Davidson. My mid-life crisis was renting a dumpster.

It was a glorious five days together and my life will never be the same.

You may be scratching your heads a bit, I get it. Hopefully once I’m done explaining, you will too.

By now you’ve probably heard of Marie Kondo, a Japanese organizing guru and author of the bestseller that sparked a revolution, “The Life-Changing Magic of Tidying Up: The Japanese Art of Decluttering and Organizing.”

What this book did really well was address the personal relationships we have with our things. She lists just two reasons why we have difficulty letting something go: attachment to the past and fear for the future. For these reasons, clutter can easily become a physical manifestation of mental health issues. If you’re holding on to too much of the past you may become depressed. If you worry about throwing things out because you may need them again, or worry you won’t be able to replace them when you do, you may be too anxious.

For me, both applied. The thought of having to actually sift through so much stuff also felt very overwhelming, further amplifying my anxiety. Throw in a dash of some good old fashioned laziness and I had the perfect recipe for years of avoidance coping when it came to clutter.

I made the decision to declutter in one fell swoop. I would absolutely recommend the dumpster route if it’s an investment you are able to make. It allowed me to be more liberal with what I was throwing out, and it gave me a deadline. There’s also something liberating about hurling your trash through the air as a final farewell to that jerk who broke your heart in college.

Whether you go big or start small and space out your decluttering projects, here are some ideas to help you begin to make a dent.

That brings me to the three instant benefits I reaped from getting rid of (literally) a ton of stuff.

On an emotional level, this project had its ups and downs, but in the end it reminded me of a life well-lived and it created a future with more room to play.

While I’ve shared a lighthearted take on this topic it is important to note that in extreme cases individuals should seek professional help. Kathryn Berthiaume is a mental health counselor at CHD with extensive knowledge on hoarding disorders. “The act of excessive collecting can indicate that there is a serious underlying mental health condition. The need to hold onto items regardless of related hazards, risks, and impact on others, can become all-encompassing in an individual’s life,” says Berthiaume. If you or someone you know may be struggling with compulsive hoarding, it is essential to seek appropriate supports. Visit chd.org or call 1-844-CHD-HELP to get started.