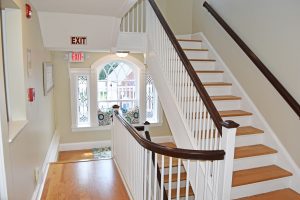 Culminating more than a year-long process of readying and transferring the whole program beginning in April 2019, Crossover’s new space features not only a central location close to area hospitals and local bus lines but also has dedicated spaces and amenities to support the individual and group treatment of those served.

Crossover is one of CHD’s Residential Rehabilitation Services (RRS) serving eight individuals with persistent mental illness and co-occurring mental illness and substance use issues with the goal of helping residents take the next step in transitioning back into the community. The program provides critical individual counseling to those served, as well as an array of structured activities and vocational groups in areas such as money management, substance use groups, family therapy, cooking and cleaning, coping skills, and more.

“Crossover’s new location is such a nice, secure and beautiful-looking space, and we couldn’t be happier,” said Program Director for CHD’s services in Hartford Raymond Grasso. “Our team at all levels really came together and put in the extra work to make this possible. [VP of Connecticut Services] Anthony Hebert physically put up the kitchen cabinets himself. It was really an amazing effort all around.”

Including recently updated living, kitchen and dining spaces, the new location also features a green space on the property for residents to enjoy time outside, as well as a media room, game room, a laundry area and plenty of bathrooms to be shared among residents. Plus, the historic Spencer House has a storied past. Previously, Spencer House served as the headquarters for Hartford’s WCCC radio station, the station at which Howard Stern previously hosted the morning show early in his career in 1979. An ‘On Air’ light from the House’s previous ownership remains over the door of a room in the lower level.

“Now it’s a space that gives back to the community and helps people,” Grasso said. “It’s a wonderful program in a wonderful place. Crossover has such a great team. Every time I visit, I don’t know who’s more excited—staff or the people served.”

In the foyer of the updated Spencer House hangs a framed letter addressed to WCCC written by a relative of the individual who built the home over 90 years ago. The typed correspondence now serves as a reminder that though the space has evolved over decades it retains a version of the passion and purpose that went into its original construction.

“There was a lot of love and thought put into planning the house and there was a lot of love generated after it was completed and occupied,” reads a 1979 letter from Louis E. Spencer, grandson of the house’s original builder, Alfred Spencer, who built the home in 1929. “There are many fond memories attached to [Spencer House]. We want to wish you and your company much happiness and success in its new home. You have chosen a great place to seek it.”