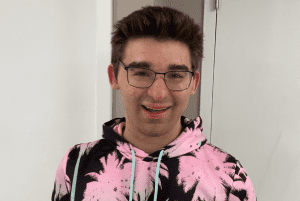 Giovanni Durocher (pictured), an 18-year-old athlete in CHD’s All In Barrier-Free Recreation Adaptive Dance Program, has no problem cutting loose on the dance floor, and he’s more than happy to demonstrate several moves he’s learned: “raise the roof,” “wash the floor,” and the “roly poly.”

“This is so much fun for me,” said Durocher during a break at a recent dance session at the Ohana School of Performing Arts in Chicopee. “I get to dance, and I get to meet other kids.”

He is on the autism spectrum, but he certainly doesn’t let that get in the way of his enthusiasm for dancing, nor does it limit his capabilities off the dance floor. In fact, as part of his Eagle Scout project for his Boy Scouts Troop 303 in Springfield, he hand-crafted a storage cart for sleds in All In’s sled hockey program, which allows individuals from four years of age and older with disabilities to enjoy the great sport of hockey.

Adaptive dance and sled hockey are two of All In’s many programs, which include cycling, fishing, rock climbing, basketball, water skiing, martial arts, and swimming. It has long been known that adaptive sports and other adaptive recreational activities have the unique ability to transcend language, social, and cultural barriers to make them an ideal tool for not only inclusion, but also for improving the mental and physical health of participants. Studies have demonstrated that people who take part in programs like All In show improved mood, fewer symptoms of anxiety and depression, improved social life and family relationships, and more stamina and muscle strength.

Durocher has participated in several of All In’s offerings, including bowling, rock climbing, fishing, and swimming, but it’s clear that dance is his favorite activity. He has been involved in All In’s dance program for 10 years and he doesn’t hesitate to name his favorite artists he likes to dance to: Michael Jackson, Cher, Bob Marley, and Blake Shelton—and specifically the Keala Settle song “This is Me” from the film “The Greatest Showman.”

When asked what he would say to someone with a disability who might be hesitant or shy about strutting their stuff in the dance studio, he said, “I would say to them, ‘Don’t worry—I’ll help you out.’”

“It’s OK to be different”

Cammie Hines, 17, likes to dance to country music in her wheelchair—but she also has a soft spot for Justin Bieber, along with Bobby Bones and the Raging Idiots.

This senior at Chicopee Comprehensive has been taking part in All In’s adaptive dance program since she was five years old. “It’s a lot of fun here—I have a great time. I get to learn new dances, and they teach me great moves—spins, kicks—a lot of different stuff,” she added.

Hines has cerebral palsy and is legally blind, but she didn’t let that stop her from demonstrating a “shimmy” move with her arms and then a spin—she proceeded to execute two 360-degree turns in her wheelchair. Her twin brother, who also has cerebral palsy, is in All In’s dance program as well, “but he’s too shy to be interviewed,” she said with a laugh.

All In Outreach Coordinator and Dance Instructor Danielle Bachand said her program modifies typical dance moves, depending on the dancer, to make choreography feasible for dancers with different abilities. “Maybe it’s using an arm instead of a leg,” she said. “The person still does the same moves as all the other dancers.”

Samantha Fernandez, Hines’ mom, said her daughter has gained a wider range of motion from participating in the dance class. “It has also helped her confidence over the years,” she said. “Cammie has gained some great friends here. It has always felt like a family.”

Hines, when asked what she would say to someone in a wheelchair who might be self-conscious about joining this kind of dance program, replied, “I’d tell that person that it’s OK to be different.”

All In Program Manager Jessica Levine described the energy in the dance program as “truly magical,” especially during recitals. ”The spirit and enjoyment that shines off the dancers is such a humbling thing to see,” she said. “You can tell that everyone loves being there and wants to show off their dance skills.”

Levine is surprised to still find people who have no idea there are athletic activities for those with disabilities. “It’s sometimes shocking to people how simply modifying an activity can open up a sport to all individuals,” she said. Levine pointed out that programs like All In are important because they can help reduce the stigma associated with a disability by reshaping assumptions about what individuals with disabilities can and cannot do.

“Some people think there’s a lack of ability and competence associated with disability, but when you view programs like All In, negative perceptions can change into positive ones,” she said. “Our program allows folks to reduce their focus on the wheelchair or the disability and instead focus on the actual person. In a lot of our All In programs, we welcome those without a disability to participate, especially in our sled hockey program. When you get in a sled it is absolutely equal playing field for everyone. The individual that has one leg has the same set of rules as the individual that has two legs.” 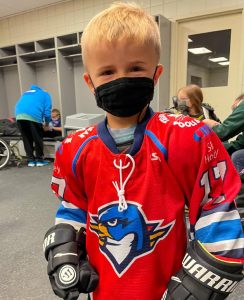 Sled hockey, one of All In’s most popular sports, is similar to “stand up” hockey, except that participants sit on a sled that has skate blades and a runner in front, and use two shortened hockey sticks with a blade on one end and a pick on the other end, which enable them to propel themselves across the ice. CHD partners with the Springfield Thunderbirds AHL hockey team to offer three co-ed teams consisting of adult competitive/travel, adult recreation, and youth sled hockey players. The season culminates in the Cammer Cup, in which each of the three teams play games against rivals prior to a Thunderbirds game in the MassMutual Center.

The Cammer Cup may be the highlight of the season, but an equally important event in the program is the open clinic held in the summer, when new players—many uncertain about participating—ultimately fall in love with sled hockey. For some, playing a sport is something they thought they could never do, but on the ice, they redefine what they are capable of accomplishing. Once they get comfortable on the sled, propelling themselves, and taking shots, their demeanor changes—it’s as if the sport erases their disabilities and levels the playing field, according to All In Outreach Coordinator Ryan Kincade.

Cody, a five-year-old All In sled hockey player, was born with Osteogenesis imperfecta, a genetic disorder characterized by bones that break easily. Cody experienced his first bone break at six months old, and has had several since then. His weaker bones are in his legs, and he has had multiple breaks in both. But that doesn’t prevent him from playing hockey, a sport that his older brother (who doesn’t have OI) plays. “Cody doesn’t think about how his condition limits him when he’s playing sled hockey,” said his mother, Krista Callahan. “He is playing a sport and trying to learn and train like any other kid. That’s so huge.”

Troy Cronin had both his legs and seven fingers amputated after contracting Bacterial Meningitis and sepsis when he was one-and-a-half years old. But with hard work and resolve, he became one of the fastest sprinters on his Westfield State University track and field team, using carbon fiber “running blades” prosthetics. Now 24, Cronin has set his sights on qualifying for the 2024 Paralympics in Paris. He credits All In with instilling enough confidence in his abilities to triumph over adversity and find success.

Cronin was introduced to All In when he was in seventh grade, playing sled hockey for the first time. “I was nervous because sled hockey requires dexterity in both hands, but due to the amputation of my fingers on my left hand, I needed help figuring out how to hold my left stick,” he said. “CHD worked extremely hard to create a stick set up that would allow me to play, and the coaches worked with me every practice so that I would improve and continue to enjoy the game.”

This was the first time Cronin had played—or had even seen—an adaptive sport, and sled hockey quickly became his passion. He has also participated in Adaptive CrossFit and fishing with All In, and looks forward to these activities every year because they allow him to enjoy sports with people who are going through similar challenges. “I have learned a lot from the mentors and staff at CHD, and I have met lifelong friends that I consider family,” he said. “CHD’s programs have allowed me to not feel disabled but empowered to live out my dreams.” 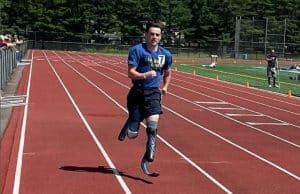 Indeed, many All In athletes enter the program interested in one sport but end up playing multiple sports. Heidi Irwin tried All In’s adaptive rock climbing, even though she can only rely on one of her legs for leverage, and loved it, so she also got involved in adaptive water skiing and hand cycling. “Adaptive rock climbing was actually the catalyst for me doing other things that I was nervous to do,” she said. “The first time rock climbing kind of changed everything for me.”

Levine pointed out that through adaptive sports, individuals with disabilities boost social skills and develop more independence and confidence. She was recently talking with a participant in All In’s adaptive rock climbing program who was excited about an upcoming cookout because she planned to show her family pictures of her rock climbing and reaching the top of the wall.

“She had tears in her eyes when she told me that she didn’t think there was a program like this—and people like ours—that can be accommodating and encouraging,” said Levine. “She said she was so happy that she joined our programs because she was able to push herself and overcome her fears of not being able to see some of the rocks or hear the person who was belaying her. That whole interaction made me appreciate what my program stands for and the impact these activities have on individuals with disabilities.”