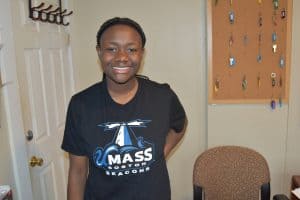 A pair of youths served by CHD’s family shelter system have recently earned Rising Stars awards from the Holyoke Public Schools. This is the most prestigious honor offered by the school district for students who demonstrate academic excellence, leadership skills, and community involvement.

Merlandie Pierre, a native of Haiti (pictured at right) who graduated from Holyoke High School in June, and George Rivera, a graduate of Veritas Prep, have overcome incredible odds and hardships to excel in the classroom and beyond.

The two teens are from the more than 400 families that CHD assists every year with both emergency and long-term housing solutions, along with a range of supports, with the goal of securing permanent housing.

When Merlandie Pierre and her five siblings moved to Holyoke two years ago, at first she wasn’t thrilled about leaving her Brockton High School friends behind, but unknown to her there would be better times ahead.

“It was kind of chaotic—I had recently experienced the death of my father, so I was happy we had found a place to live in Holyoke and weren’t sleeping in the streets,” she said.

She is grateful to CHD’s family shelter services for not only putting a roof over her family members’ heads, but also helping them apply for jobs and access community resources, including the YMCA and the Boys & Girls Club of Greater Holyoke. She especially has high praise for Selorm Hayibor, a supervisor in CHD’s Diversion, Shelter, and Housing Division, for helping her family out.

Hayibor, however, is quick to deflect attention back to Pierre. “I am beyond proud of Merlandie,” he said. “To go through all she has been through and for her to still have the state of mind to accomplish what she has—it’s incredible. When they put her name in the newspaper, I cut out the article and put it on the bulletin board in the office here.”

“Oh, you were the one who did that?” asked Pierre with a laugh.

“If I had my way I would have put her name up on a big banner!” he replied. “It’s a joy that—all things considered—she was able to pull this off.”

It wasn’t easy. In her junior year, she had a 2.5 GPA. “I said, ‘This is unacceptable,’ and got it up to 3.4 in my senior year,” according to Pierre. Accepted by 13 colleges, she will begin school at UMass Boston in the fall and major in criminal justice. “My goal is to become a lawyer,” she said. “My father always said I’d make a great lawyer, and that’s what I want to do. I will never stop pushing.” 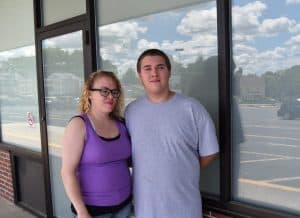 George Rivera (pictured with his mother at right) led his Veritas Prep eighth grade class in academics this year, despite his mother losing her job—and her apartment. “I’m still amazed that George was able to do this, said Rivera’s mother, Kayla Chandler. “With everything happening to us, I thought he might have a downfall, but he was so focused on school and he did well. He acts like it’s no big deal, but it is.”

Indeed, her son seems to take his success in stride, saying with a shrug that he has been among his class’s top students since he was in the fourth grade. According to the Holyoke School Department, Rivera “is an exceptional scholar and serves as a student ambassador. He shows maturity and is respectful in the classroom to both his teachers and fellow students.”

Chandler recalled last winter, when the outlook for her and her son was bleak. While her son stayed with friends or relatives, she slept under the Route 202 bridge that connects South Hadley and Holyoke. “I was embarrassed by the whole situation,” she said. “I didn’t want people to know. We’ve been through the gutter this past year—you could write a book on all that’s happened to us.”

And yet Rivera received exceptional grades during the entire ordeal. “We were homeless, but George still came out on top in his class,” she said. “I don’t know how he managed to do that. Before that, we had an apartment for nine years—we went from having everything to having nothing. Now we’re happy to have a roof over our heads.”

Rivera will attend Holyoke High School’s Dean Campus, where students embark on a vocational technical education. He is a math whiz—he was busy solving a Rubik’s cube before he was interviewed—and is looking forward to high school and the prospect of exploring carpentry, which uses math formulas and computations.

“I don’t even have the words to describe how proud I am of him,” said Chandler. “He deserves the world.”