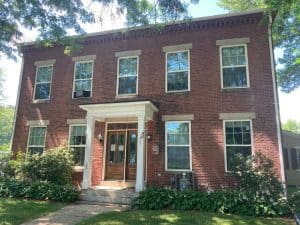 Elizabeth, a recent graduate of CHD’s Grace House in Northampton, is grateful for the team at one of the few residential treatment programs designed for mothers in western Massachusetts. “They helped me get my life back together,” she said. “They helped me become a functional adult again.”

After she had relapsed and went into recovery, the native of Fall River, MA, had joined other moms—and their children—in this close-knit sober community that provided her with the clinical and supportive services she needed to be a capable parent to her three kids. She had stayed at Grace House with her baby—now 18 months old—and this summer she returned to the house for a picnic accompanied by her toddler, as well as her 12-year-old daughter.

The picnic was an event that included face painting, temporary tattoos, a water slide, and a snow cone machine—and a celebration of recovery as everyone took a break from the fun to listen to three guest speakers discuss how they overcame their addictions. Their stories were familiar to Elizabeth. “Losing your life and getting it back—and getting your kids back,” she said. “The whole process of learning about yourself—those three people went through the same thing I did.”

Zoe, one of the speakers, talked about the value of having a support team in her early days of recovery. “You don’t have to do this alone,” she said. 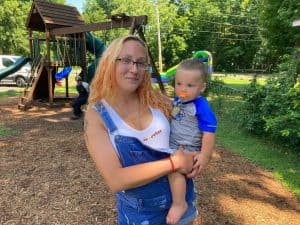 Indeed, what Elizabeth (pictured at right) found at the Grace House were individuals who cared, were invested in her recovery, and helped her deal with the impacts of trauma on her life. “They helped me get over—or rather, work through, the trauma,” she said.

In a therapeutic setting, Grace House provides up to 14 families with a safe, nurturing environment where mothers and their children can experience success. The residents’ days are centered on recovery meetings, sessions with counselors, and group therapy. Some of the groups offered are Dialectical Behavioral Therapy, Cognitive Behavioral Therapy, Group Peer Support, Seeking Safety, Relapse Prevention, Early Intervention, Family Strengthening, Parenting, Trauma Recovery & Empowerment, Peer Advocacy, and Health and Wellness, as well as a variety of life skills groups.

Grace House also provides GED prep courses, yoga and other wellness practices, help for mothers in caring for and maintaining custody of their children, and tools for getting back into the workforce.

Program Director Jennifer Kent says the favorite part of her job is helping mothers take care of themselves while they take care of their own children. “They are people going through recovery, but also being mothers on top of it,” she said. “They are mothers who feel present—and they weren’t before.” Grace House is part of the state’s regional Continuum of Care (CoC) coalition, which coordinates services for homeless families and individuals to give them assistance in finding housing.

“Because of our involvement with the CoC, our residents leave with stable housing and the supports that they need,” she said.

“I’ve seen so many graduates of this program and so many successes,” said Kent. “I received a letter this week from a graduate thanking us for saving her life and believing in her. She wrote that until we came along, no one had believed in her.”

Especially gratifying for Kent is “seeing children be kids again—beyond the confines of the structured program.” Filling the air as she said this were the sounds of children’s laughter and splashing on the water slide. Running by her was Children’s Services Assistant Caitlin Mogilka, who was being chased by a girl with a squirt gun. Several weeks before, there was a field trip to Ocean Beach in New London, CT. Christmas and Halloween celebrations are also festive occasions—with children frolicking around them, the mothers feel blessed to be where they are on the road to recovery and to have their kids with them on the journey.

A skeptic might say that raising a child while recovering from substance use disorder would add to a mother’s anxiety, but by including children in the treatment, Grace House is able to treat the whole person, according to Kent. The mothers are learning skills to balance the stresses of parenting and sobriety—new skills such as de-escalation techniques and emotional regulation, as well as emotional identification and expression. “They are also able to bond with their children appropriately, learn what unhealthy attachment looks like, and how to manage their own trauma and triggers so that it does not impact their children,” said Kent.

Family reunification during this process promotes better mental health, reduced anxiety and an overall happier living environment for the families, according to Kent. “Through the parenting supports and family therapy offered at the program, our mothers re-establish their relationships with their children while working through their challenges. The mothers are then prepared to live independently and successfully with their children after graduation. In addition, these necessary family strengthening skills often assist with breaking generational cycles.”

A History of Healing

Grace House was established in 1990 as an outgrowth of CHD’s Jessie’s House—one of the first family shelters in Massachusetts—which Priscilla White had founded in 1983 when she was CHD’s director of CHD’s Homeless Services. Jessie’s House serves six families at a time in Amherst, providing them with a safe place to call home.

White, now retired from CHD, explained that Grace House filled an urgent need, because although Jessie’s House had been assisting families with developing the skills and strategies that fostered self-sufficiency, some of the mothers leaving there had still stumbled on the path to sobriety. “They had permanent housing, they had their kids back, and we provided outreach services when they left, but many of them still had their old friends—and what were their old friends were doing? They were using [drugs].” So some of the mothers relapsed.

“We asked the mothers why they didn’t go into treatment, and they said they didn’t want to give up their kids,” said White. “I replied, ‘If you could have your kids with you, would you go into treatment?’ They said, ‘For sure. I would do that.’ So I thought it was time to start another program—a family recovery program. We did some research and modeled it after one we had heard about in Chicago, where mothers could live with their kids while they recovered and they didn’t have to put them in foster care.”

White became Grace House’s first program director, and for the past 32 years this sanctuary has been providing families with a stable and consistent setting where mothers can grow emotionally, socially, and spiritually.

Crystal, from Greenville, SC, became addicted to OxyContin at 24 after a CT scan revealed a cyst on her brain. After her alcoholic father died following a fall, and her younger brother died in 2013, doctors prescribed her Xanax and Clonopin for her panic attacks. “I was out of control, but I didn’t think I was,” she recalled. “I thought that because I had an apartment, a job, a car, and my kids, I didn’t have a problem.”

Her mother’s family, who live in western Massachusetts persuaded her to move with her children to the area and get help. “I was just numbing myself with medications,” she said. Now, at the Grace House with her 13-year-old son Kayden, Crystal uses individual and group therapy to help her address her past traumas and the addictions that had gripped her.

“All the staff here is open to talking with you—and not just in therapy,” said Crystal. “If Vic [Casework Manager Victoria Stanulonis] is just walking by, and I want advice, she’ll sit down and listen to me. My son has teenage growing pains, and he has Clara for a therapist.” Nonetheless, Crystal said, sometimes a boy needs a male adult he can talk to, and she has high praise for Juan Ruiz, a direct care worker at Grace House. “Kayden really likes Juan, and he opens up to him,” she said. If he’s upset over a girl, and I ask him, ‘What’s wrong?’ he’s not going to talk to me. But he’ll definitely talk to Juan about it.”

Ruiz, however, is modest about his contributions. “Whatever small part I can do to help these families move forward—whether it’s just a conversation, or talking with a mother’s DCF case manager—it fills me with joy,” he said.