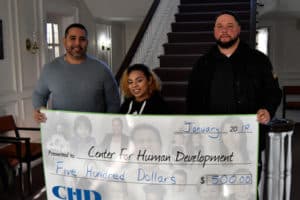 In 2015, Johnathan and Jillian were struggling to make ends meet. They had full-time jobs and aspirations of making it in the music business.

They had two young children and lived in a third-floor walk-up in the city’s South End. Neither came from wealth, or even working-class homes, but they were a smart and ambitious young couple.

Jillian was captain of the cheerleading squad and president of her high school class. She was used to attaining her goals and worried life was stalling in the South End.

“It was supposed to be a stepping stone, but we just weren’t stepping,” Jonathan says.

Then tragedy struck. While attending a concert at the now-shuttered Paramount Theater on Easter Sunday, shots rang out. Someone was firing wildly into the lobby.

Jillian was hit in both legs. Jonathan threw himself on top of her and was grazed in the calf.

With finances already stretched tight, the experience was devastating. Jillian was hospitalized, then lost her job. She could barely climb the stairs once discharged from the hospital. To add to their troubles, a pipe burst in the apartment causing widespread water damage.

Forced out of their home, they searched for safe, affordable options to no avail. Then a friend suggested CHD.

“I went to homeless services, basically told them our story. They started helping me out,” Jillian recalls.

The family moved into shared housing, then a single-family unit for several months until they could find something more permanent.

“CHD literally rescued the family,” says Jonathan. “I don’t know what else we would have done.”

While Jillian recovers from her injuries, Jonathan is back to work. Both musicians, they decided to cut a charity hip-hop album called “Tis the Season” along with other local artists.

They made $1,000 and promptly donated half to CHD. It was a gesture of generosity that extended beyond their means, staffers remarked. The donation was made on behalf of Smifhouse Records (his music label) and Studio Rebels (her graphic arts business).

“After all we’ve been through, I thought, we should give back to somebody who helped us,” says Jonathan.

The donation came just in time to help stock an ad hoc pantry with items like baby formula during a period of high need.