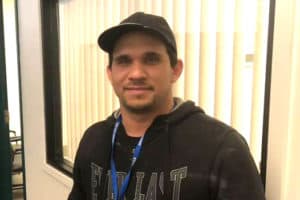 In 2017, Julio’s home in Puerto Rico was destroyed by Hurricane Maria. His family lived on an outdoor basketball court for nearly a week before staying, temporarily, with his sister in Western Massachusetts.

With just $2,000 in his pocket, rebuilding a life on the mainland was beyond his means. When his wife fell ill, the family became homeless.

“I couldn’t believe what our lives had become that quickly. We lost everything. I felt lost and didn’t know what to do,” he recalls.

Julio was referred to CHD, which provided a furnished apartment and a plan to get back on track.

“What struck me from the first day I met Julio was how grateful he was. He thanked us every single day he was there,” says program supervisor Datsy Aponte.

She added that Julio was quick to offer help with clean-up and odd jobs around the complex, and was a regular presence on the playground with his children. Once his wife’s health issues stabilized and his children were settled in school, he began looking for work in earnest.

“I told him to meet me at my office one day, bring a resume, even if it was handwritten, and I would help him start looking for a job. I’ve made those offers to clients before and some haven’t even shown up for the meeting. Julio came early,” Datsy recalls.

Included in his job hunt were several inquiries to CHD. With maintenance and security experience, he applied for an opening in the maintenance department. He was called for an interview, then for a second.

“They offered me the job on that second day and, I’ll be honest, I cried,” he says.

Julio has been a full-time employee with CHD since 2018. His family recently moved into a market rate apartment in Monson. He’s enjoying the quiet community and is thrilled to have regained his independence.