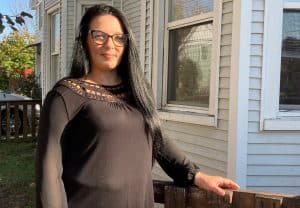 In the summer of 2020, Casey knew she had to drastically change her life when she overdosed twice.

This happened after her children, who were 11, 5, and 3, were removed from her home because her daughter’s father had overdosed there, and he was also physically abusive. That’s when her addiction spiraled out of control.

“I have a 25-year-old son who literally fell to my feet and said, ‘I don’t want to lose you, but I have to love you from a distance,’” she recalled. “That was the push I needed, because he wouldn’t talk to me anymore. And I lost my girls. They had never been removed from me until then. I had them their entire lives. To feel that empty—I felt I either wanted to die, or I needed to go somewhere.”

That October, 45-year-old Casey and her three daughters joined the close-knit sober community of CHD’s Grace House in Northampton, one of the few residential treatment programs designed for moms in western Massachusetts. “It was life-changing,” she said. Casey took advantage of group therapy and she came to terms with the root causes of her addictions. “I had been to therapy before, but nothing ever clicked,” said Casey. This time it simply worked.

“The other moms were going through the same thing as I was,” she says. “We worked on bettering our lives and understanding why we made the choices we made.” Casey, who grew up in Fall River, started using heroin and cocaine with her daughters’ father when she was 29. “What I gained from Grace House was insight into why I did the things I did, and it stemmed back to my childhood,” she said. Casey was a victim of sexual abuse as a child, and her mother was in and out of psychiatric hospitals.

Before Casey went to the Grace House, she was dealing with not only drug addiction, but also domestic violence. Her therapists helped her discover why she gravitated toward toxic partnerships. “I found out that I had abandonment issues,” she said. “I was basically addicted to bad relationships in the same way I was addicted to drugs.”

Casey’s past made it difficult for her to trust the right people. What she found at the Grace House were individuals who cared, who were invested in her success, and who helped her mend the impacts of trauma on her life. “Before, I didn’t feel comfortable asking for help,” she said. “I wasn’t assertive. My self-esteem was low.” With room for 14 families, Grace House provides mothers with clinical and supportive services to offer guidance and work through setbacks. Casey marveled at the way she and the other mothers in the program grew emotionally, socially, and spiritually as they navigated recovery. “We built each other up,” she said. “I made great friends there, and I’m still in touch with some of them. Grace House had therapy for my kids, too, and it helped them so much.”

Among the people she has high praise for at the Grace House are Clinical Director Devin Daly, therapist Clara Wagner, and Program Director Jen Kent. “Jen was a great listener,” says Casey, who credits Jen with always lending an ear when her anxiety level was high.

Casey now lives in a small western Massachusetts town and living a family life that is a far cry from her rough-and-tumble upbringing in Fall River. Grace House helped her find housing, and her next goal is to go back to school. “I want to help other women in recovery—women who have gone through domestic violence,” she said. “I am so grateful to everyone at the Grace House. They taught me how to be a mom again.”