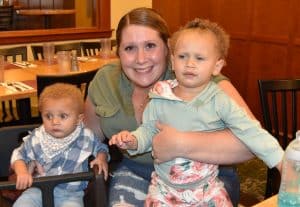 When Courtney looks at the root of her substance use disorder, she recalls making bad choices in her teenage years, when she first started using drugs. But she knows it went back further than that: her parents had suffered from addiction when she was growing up.

Before Courtney turned to CHD’s Grace House in Northampton, one of the few residential treatment programs designed for moms in western Massachusetts, she had dealt with abusive relationships, homelessness, and a feeling of powerlessness over her substance use.

“I was the person who had talked crap about anybody who used [drugs] while they’re pregnant, and that ended up being me,” she said. This resulted in Courtney losing custody of her daughter and son.

Courtney credits Grace House with not only helping her rebuild her life, but also enabling her to regain custody of her children. She took advantage of individual and group therapy and other supportive services to get back her family—and her future. Grace House provides up to 14 families with a safe, nurturing environment where mothers and their children can experience the success that had eluded Courtney when she tried to stop using drugs on her own, and found out that she couldn’t—even while pregnant.

“I am grateful for everything, especially Grace House,” she said. “God is good.”

What would she say to anyone else in her shoes who is struggling like she was? “You can do it,” she said, pointing out that recovery doesn’t happen overnight—it takes one step at a time, including that important first step of accepting help. “As long as you put one foot in front of the other, you’ll make it,” she said.