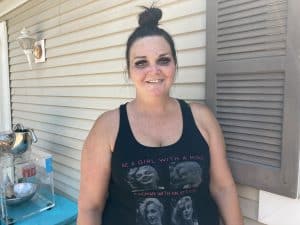 Crystal lives at CHD’s Grace House in Northampton with her 13-year-old son, Kayden. In a therapeutic setting, Grace House provides up to 14 families with a safe, nurturing environment where mothers and their children can experience success. It is one of the few substance use residential treatment programs designed for mothers in western Massachusetts.

A native Greenville, SC, Crystal became addicted to OxyContin at 24 after a CT scan revealed a cyst on her brain. When her alcoholic father died following a fall, and her younger brother died in 2013, doctors prescribed her Xanax and Clonopin for her panic attacks, and she developed more substance use problems. “I was out of control, but I didn’t think I was,” she recalled. “I thought that because I had an apartment, a job, a car, and my kids, I didn’t have a problem.”

Her mother’s family, who live in western Massachusetts persuaded her to move with her children to the area and get help. “I was just numbing myself with medications,” she said. At Grace House, Crystal uses individual and group therapy to help her address her past traumas and the addictions that had gripped her.

“All the staff here is open to talking with you—and not just in therapy,” said Crystal. “If Vic [Casework Manager Victoria Stanulonis] is just walking by, and I want advice, she’ll sit down and listen to me. My son has teenage growing pains, and he has Clara Wagner for a therapist.” Nonetheless, Crystal said, sometimes a boy needs a male adult he can talk to, and she has high praise for Juan Ruiz, a direct care worker at Grace House. “Kayden really likes Juan, and he opens up to him,” she said. If he’s upset over a girl, and I ask him, ‘What’s wrong?’ he’s not going to talk to me. But he’ll definitely talk to Juan about it.”

Ruiz, however, is modest about his contributions. “Whatever small part I can do to help these families move forward—whether it’s just a conversation, or talking with a mother’s DCF case manager—it fills me with joy,” he said.

Crystal said she can’t thank Grace House enough for the treatment she has received. “The people here have given me a foundation to build on,” she said.