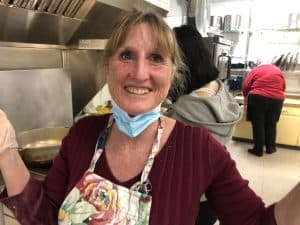 Deb Napier, a volunteer for CHD’s Not Bread Alone (NBA) community meal program at the First Congregational Church of Amherst, is a weekly fixture in the NBA kitchen, which provides a high-quality meal to members of the community every Wednesday, Saturday, and Sunday—as well as Thanksgiving and Christmas. It also distributes groceries every Saturday.

Napier was awarded CHD’s Volunteer of the Year award in 2020 for her support not only at NBA, but also CHD’s Family Outreach of Amherst, a safety net for low-income families that provides a variety of services.

She has helped support both programs in a number of ways, including bolstering fundraising efforts and sourcing hard-to-find supplies.

“At Not Bread Alone, we serve people who not only want a meal, but they want a community as well,” she said.

Napier has one word to describe NBA in a town in which 31.3 percent of the population lives below the poverty line (the national average is 12.3 percent). “It’s essential,” she said. “Many people tend to think only in terms of black and white, but it’s not just poor and rich: there is this huge middle ground where people don’t make a lot of money, and salaries haven’t gone up with inflation.”

She said society tends to avoid thinking about people affected by food insecurity because it makes them uncomfortable. “To some, they’re invisible,” said Napier. “To us, they’re not invisible. Some of these people live in apartments, and some live in shelters. They are struggling to just put food on the table, and that’s what we do for them. We’re a place where they can go and count on very healthy meals and not feel ashamed about it.”