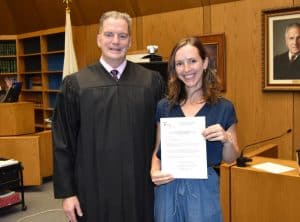 Emily Sheridan, one of the seven new volunteers in CHD’s Court Appointed Special Advocates (CASA) Program of Hampden County, is used to working with children—and not just because she is the married mother of a toddler who proudly attended his mom’s swearing-in ceremony at Springfield Juvenile Court in June.

Sheridan, pictured with First Justice David Paradis, is a registered nurse in Baystate Medical Center’s Pediatric Emergency Department, where she cares for patients suffering from various types of physical and emotional abuse, trauma, and neglect—many of whom are in acute mental health crisis, and are undergoing extended Emergency Department stays while they await inpatient placement.

“In my work as a pediatric nurse I see the short-term view of some of the issues I will see longer-term in the CASA program,” said Sheridan.

Most of the children that CASAs advocate for in the courts have been removed from their homes due to maltreatment, including abuse, violence, neglect, or abandonment, and are being placed in foster care. Appointed by judges, CASA volunteers ensure a safe, permanent home for the children.

“One of the most difficult parts of my job as a nurse is that kids in the hospital don’t feel listened to, so I try to help them feel that someone is listening to what they have to say,” she said. This skill translates well to the CASA program, which gives kids a voice in the courtroom—advocates are the eyes and ears for the judge, giving an unbiased and child-focused opinion to the court.

“My favorite part of this program is being able to have a longer-term connection with the children,” she said. “In my job I see a lot of kids involved with DCF [Department of Children and Families], but as I said, it’s a short-term connection, so I’m limited in what I can do for them. As a CASA, I look forward to looking out for the children’s best interests.”

CASA is seeking new volunteers to serve as advocates for children in need in the community. Program staff will host virtual information sessions every Wednesday in August 2022 to help prospective volunteers learn more about the role in advance of the program’s next round of training in the fall.