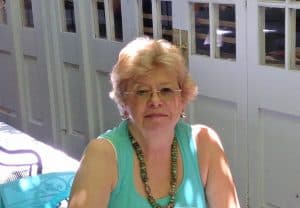 Mary Andrewes has been a volunteer for CHD’s Court Appointed Special Advocates (CASA) of Hampden County for over six years, and she’s been a dedicated advocate for children in need for even longer.

A retired educator of 35 years, Mary started out as a high school English teacher and then became a school adjustment counselor/school social worker and special education team leader. Later in her career, Mary transitioned to administrative positions, first as the special education supervisor for two middle schools and the high school in her district and then served as interim principal prior to her retirement.

As a counselor, Mary worked on special projects with other school social workers to provide parent/guardian workshops and teacher professional development workshops on topics such as foster care and working with the Department of Children and Families. In her retirement, Mary’s transition to volunteering as a CASA was a natural extension of her work and dedication.

“The impact I strive for is similar to what I strove for as a teacher and counselor—to enhance a child’s feeling of self-worth and acceptance by having a positive personal connection with someone who cares,” Mary said.

Since her CASA training, Mary has worked primarily on a case involving five children—three of whom have been successfully adopted, and two returned to biological parents, one to the dad, and the other to mom. Over the years, as these children transitioned to different foster homes, sometimes to residential treatment, Mary, as their CASA, was often the one constant person in their lives.

For more than two years, Mary has also been a member of the newly formed Massachusetts CASA Board of Directors, which provides support to local programs and serves as a liaison between them and the National CASA Association for Children. She has also completed training and become certified as a Special Education Surrogate Parent (SESP) and serves in that capacity for a child on her caseload.

SESPs are appointed by a school district to represent a child who has or may need special education services, often if the child’s parents are unknown or unavailable, or if the child is a ward of the state. They meet with their assigned student or observe them in the classroom, receive all progress reports and attend Individualized Education Program (IEP) meetings to advocate for the child’s best interest.

“I would like to think that in some small way I may help to reverse the cycle—poverty, lack of educational resources, untreated mental health issues, child abuse and neglect—that keeps many families and children unable to prosper,” Mary said.

We Give Kids a Voice In The Courtroom

Since 1977, Court-Appointed Special Advocates (CASA) have been speaking up for kids who can’t. CHD’s CASA of Hampden County advocates for local children being placed in foster care or searching for permanent homes to help them find stability and thrive.

Find out how you can make a difference as a volunteer, or sign up for an info. session.