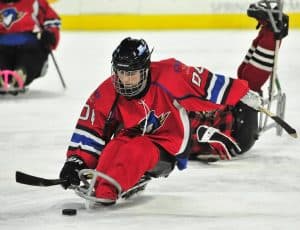 To call Troy Cronin “driven” and “tenacious” would be understating his willpower. He simply refuses to let anything stop him from reaching his goals—even though he had both his legs and seven fingers amputated after contracting Bacterial Meningitis and sepsis when he was one-and-a-half years old.

With hard work and resolve, Troy became one of the fastest sprinters on his Westfield State University track and field team, using carbon fiber “running blades” prosthetics to win his heat in the men’s 400-meter dash at WSU’s annual Jerry Gravel Classic as a senior.

Now 24, Troy has set his sights on qualifying for the 2024 Paralympics in Paris. He credits CHD’s All In: Barrier-Free Recreation programs with instilling enough confidence in his abilities to triumph over adversity and find success. Troy was introduced to All In’s competitive adaptive sports when he was in seventh grade, playing sled hockey for the first time. “I was nervous because sled hockey requires dexterity in both hands, but due to the amputation of my fingers on my left hand, I needed help figuring out how to hold my left stick,” he said. “CHD worked extremely hard to create a stick set up that would allow me to play, and the coaches worked with me every practice so that I would improve and continue to enjoy the game.”

This was the first time Troy had played—or had even seen—an adaptive sport, and sled hockey quickly became his passion. He has also participated in Adaptive CrossFit and fishing with All In, and looks forward to these activities every year because they allow him to enjoy sports with people who are going through similar challenges.  “I have learned a lot from the mentors and staff at CHD, and I have met lifelong friends that I consider family,” he said. “CHD’s programs have allowed me to not feel disabled but empowered to live out my dreams.”

His dreams include not only the Paralympics, but also a career in fitting people for prosthetics and orthotics. At present he’s in his second year of his master’s program at the University of Hartford, studying Prosthetics and Orthotics. He is applying for his residency program, in which he will work with patients under supervision of a certified clinician. “This program has been a lot of fun because I am able to live out my lifelong goal of being able to give back to others by helping them to achieve any goal that they set their minds to,” he said. “I hope to use my experience as an amputee to empathize with patients and show them that with enough work their next chapter can be very bright.”

Training for the Paralympic games “has been a blast,” said Troy. He is determined to make the top 5 at Nationals this summer and make the US team. “I am blessed to have a dedicated coach to guide me in my training,” he said. “I am also blessed to have a skilled team at A Step Ahead Prosthetics down in Long Island, who provides me with state-of-the-art prosthetics that allow me to train comfortably and efficiently.” It’s a challenge to plan his track schedule around his graduate work, but Troy is used to overcoming anything he faces. He has been doing this with both grit and grace his entire life.

When he was in Northampton High School he decided that he wanted to become one of the quickest sprinters in the US. “This attitude of always wanting to improve has helped me to become one of the fastest amputees in the country,” he said. “It will take a lot of patience and dedication but I believe that I will make the Paralympic team in 2024 and it will be such an honor to represent team USA.”

Troy’s biggest inspiration throughout his life has been his parents, who work hard, lead by example, put others first, they don’t make excuses, and they treat everyone with respect. “These are qualities that I find most important when doing anything in life, and I use the examples that they set to help me reach my goal of making team USA,” he said. Asked for his message for anyone facing similar adversity or hardship in life, he advises them to set small and large goals, and work at them a little bit more each day. “The challenges you face in life will be immense,” he said, “but with the right mindset and persistence, you will achieve your goals and you will become a stronger person. Keep fighting and improving yourself and you will be surprised at what you can achieve.”

Jessica Levine, CHD’s All In program manager, has known Troy for five years, and each year he impresses her more and more with his determination and resilience. “He is truly a great guy and we are lucky to have him in our programs,” she said.