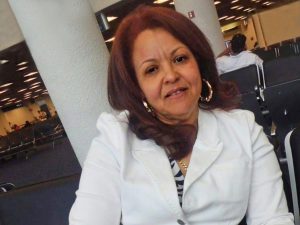 Josefina has been a foster parent for nearly 20 years. She took her first case—twin girls—when a mother she’d known for years had a case with the Mass. Dept. of Children and Families (DCF) and needed help.

The twins would remain in Josefina’s care for years as she ultimately adopted them, simultaneously inspiring Josefina’s future opening up her home to children in need in the community.

Following that first case with DCF, Josefina has been working directly with CHD’s Foster Care team since 2003. During this time, Josefina has provided a stable home for many kids over the years, each coming into her care from a range of different experiences, but each with one thing in common: the need for a stable home, and room to grow.

“Being a foster parent, I’ve come to really appreciate my family, especially my mother, for the way I was raised and the things she taught me,” Josefina said. “Some kids come to the house and there’s a lot they don’t really know or haven’t experienced before. As a foster parent, I always have somebody here to share things with or show new things to. That brings me joy. It reminds me that I can do something for somebody to make a difference.”

About three years ago, Josefina transitioned to become a home specifically for teens with behavioral needs—kids for whom it is not always easy to find the proper home. To best support all foster kids, Josefina says that, just as it’s important for each family to have active and open communication, it’s equally important for other providers supporting the child—whether it’s a teacher, doctor, or social worker—to have good communication with one another and with the foster parent(s).

All in all, Josefina says being a foster parent has taught her a lot of important skills that help her both as a foster parent and, more generally, as a person. The first thing she’s learned, she said, is to have patience. The second, to be open and flexible. Each child that comes into her home brings with them a new story. For Josefina, a new perspective. She’s taken a lot of different trainings in her 20 years as a foster parent, but affirms she learns from each foster child, too.

“To be a foster parent, you don’t have to be perfect—I’m not perfect; I’ve have a lot of stuff I’ve had to change or learn—but you have to be open to adapting,” Josefina said. “Every kid brings a new case, and each day I learn something new.”

As a foster parent, the care you provide will foster the skills and confidence needed to help kids live a full and productive life.